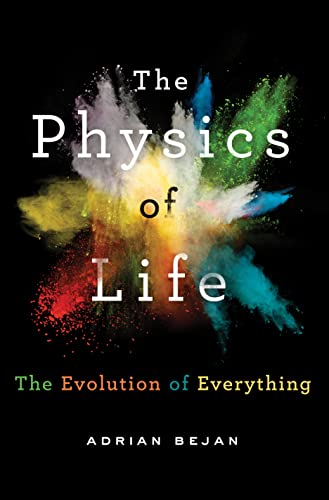 The Physics of Life: The Evolution of Everything

In this quirky, occasionally ingenious work, Bejan (Design in Nature), a professor of mechanical engineering at Duke University, explores evolution as a phenomenon not of biology but of physics. He proposes “the constructal law” that defines life as anything that moves and evolves, including rivers, cities, snowflakes, and lightning, as well as humans, other creatures, and human culture. When movement stops, life ends. Having set out this provocative idea, Bejan spends half a dozen chapters discussing phenomena that evolve according to his definition. Readers undeterred by equations, tables, and graphs will learn that constructal law supposedly explains the advance of technology, growth of cities, increasing skill of athletes, and inevitability of death. These explanations are not for the faint of heart and the work betrays the type of efficiency fetishism that only an engineer could espouse. Applying mathematics and the hard sciences to such disciplines as history, economics, literature, or human behavior has a long and undistinguished history; Bejan’s enthusiasm is obvious, but readers with fortitude and technical knowledge will find stimulating theories mixed with errors, and poor philosophical and sociopolitical reasoning presented as deeply significant but without special insights. Agent: Don Fehr, Trident Media Group. [em](June) [/em]
close
Details