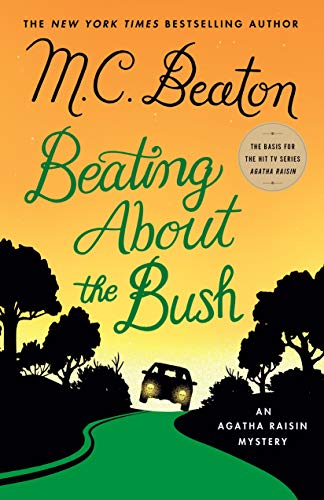 Beating About the Bush: An Agatha Raisin Mystery

At the start of bestseller Beaton’s winning 30th Agatha Raisin mystery (after 2018’s The Dead Ringer), Albert Morrison, the chairman of an English company that manufactures batteries, hires PI Agatha to find the saboteur responsible for burning down the company’s R&D department and with it the prototype of a highly anticipated new product. In the course of her investigation, Agatha comes across the body of Mrs. Dinwiddy, Morrison’s longtime assistant. The blunt-force trauma to the head in the shape of a hoof points to the company’s pet donkey, Wizz-Wazz. Agatha concludes Wizz-Wazz is innocent after discovering an ashtray made from a donkey’s hoof. Disapproving of the subsequent save-the-donkey PR campaign Agatha initiates, Morrison fires her, but this only strengthens her determination to solve Mrs. Dinwiddy’s murder. The obnoxious, rude, and outspoken Agatha may not appeal to every reader, but cozy fans with a taste for the silly and the offbeat will be gratified. This long-running series shows no sign of losing steam. Agent: Barbara Lowenstein, Lowenstein Assoc. (Dec.)

Correction: An earlier version of this review incorrectly stated this was the 29th book in the series.

Broken Summer
Broken Summer
Jm Lee
Korean painter Hanjo Lee, the protagonist of this mesmerizing novel from Lee (The Investigation), must wrestle with his haunted, long-buried past. One summer day 26 years Continue reading »

Find Him
Find Him
Jake Hinkson
At the start of this exceptional tale of crime and courage from Hinkson (Dry County), 18-year-old Lily Stevens, who’s 25 weeks pregnant and the daughter of a Pentecostal Continue reading »
chevron_right