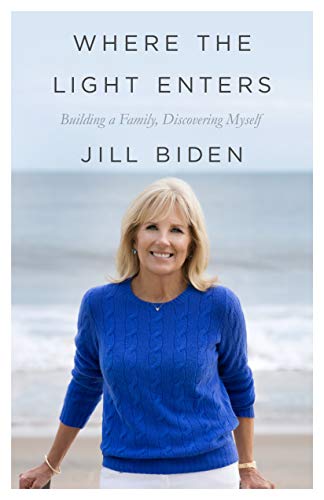 Where the Light Enters: Building a Family, Discovering Myself

In this charming memoir, Biden shares an intimate story of her life with former vice president Joe Biden. Biden grew up in Pennsylvania and New Jersey in the 1950s, the eldest of five girls born to a bank teller and a homemaker. A rebellious teenager—she smoked cigarettes and snuck out to swim at night—Biden attended the University of Delaware and got married at age 18 but divorced a few years later. At 23, on her own and teaching English in Chadds Ford, Pa., she was surprised when dapper 31-year-old Sen. Joe Biden asked her on a date. Biden soon found herself engulfed in the “boisterous” Biden clan, a close-knit and fiercely loyal crew—Joe had two sons with his first wife, who died in a car accident along with their baby daughter a few years earlier—and she and Joe were married two years later. Biden describes the closeness of the family; for example, after the couple decided to have a child together, Joe’s sons from his first marriage were the first to tell their dad of Biden’s pregnancy. The book ends with a moving tribute to her son Beau, who died from brain cancer in 2015. This generous and inspiring portrait of the Biden family is sure to be widely welcomed and enjoyed. [em](May) [/em]

Correction: An earlier version of this review misstated the year the author's son Beau died as well as the age of the author and her husband when they started dating.