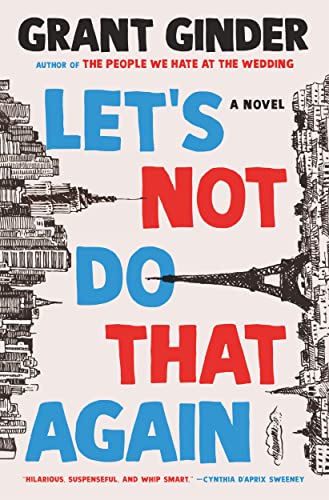 Let’s Not Do That Again

Ginder (The People We Hate at the Wedding), a former congressional intern and speechwriter for White House chief of staff John Podesta, delivers an effervescent family drama about a man’s attempts to salvage his mother’s Senate run after a PR disaster. In Paris, Greta Harrison hurls a bottle through a restaurant window during a political protest. In Manhattan, Greta’s congresswoman mother, Nancy, attempts to deflect the fallout of her daughter’s headline-grabbing behavior as the story jeopardizes her Senate campaign. She’s the kind of politician who spouts unapologetic lines like “America is disappointing... that’s why we do what we do,” and until Greta’s stunt, that approach has worked. Nancy feverishly appeals to her perpetually single gay son Nick, urging him to put aside his work writing a Joan Didion musical to bring Greta home from Paris. The task is tougher than it looks, but in Ginder’s hands, it yields devilish hilarity. Greta is under the spell of swarthy, seductive Xavier, a celebrity-seeking fascist troll, but he’s no match for Nick and Nancy, who swoop in to settle some unfinished family business. Ginder dexterously describes the machinations of his caffeine-fueled lead and lights up the pages with bubbly, rapid-fire dialogue among such supporting characters as Nancy’s assistant, Cate, and Xavier’s other gal pal, Colette. Politics and blood loyalty can become a slippery slope, but here they’re a perfect combination. This smart and seamless comedy is nonstop fun. Agent: Richard Pine, InkWell Management. (Apr.)
close
Details