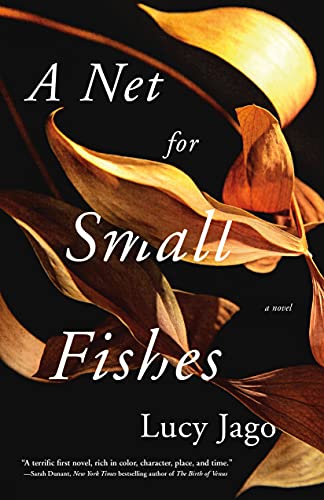 A Net for Small Fishes

The brilliant adult fiction debut from historian and YA author Jago (The Northern Lights) fictionalizes a 17th-century London murder. Anne Turner, a skilled herbalist with a gift for fashion, leads a comfortable middle-class life with her physician husband and six children. Frances “Frankie” Devereux, a member of the powerful Howard family, is married to the physically abusive Earl of Essex. When the two women meet in 1609, they feel a “profound sense of recognition” despite their differences in age, situation, and class. The following year, Anne’s husband’s death leaves her and the children impoverished, while Frankie becomes infatuated with Robert Carr, King James’s favorite courtier. As Carr falls in love with Frankie, his doting friend Thomas Overbury, a bitter misogynist who loathes the Howards, grows jealous. Frankie’s family decides to arrange the annulment of her marriage to Essex, but salacious rumors spread by Overbury sabotage her reputation and their plan. Swayed by Frankie’s misery and reliant on her financial assistance, Anne accedes to her friend’s conviction that Overbury must die. “If I were a man, I could end this with a duel,” Frankie says as the two decide to poison him. Jago’s striking depictions of bearbaiting and court mourning, wedding breakfasts and adulterous trysts capture both the brutality and the refinement of Jacobean London. Anne’s shrewd narration grounds the novel’s explosive drama even as she slides toward mortal danger one apparently logical choice at a time. It adds up to a remarkable exploration of the power, limits, and price of women’s friendship. This is a sparkling achievement. (Nov.)
close
Details