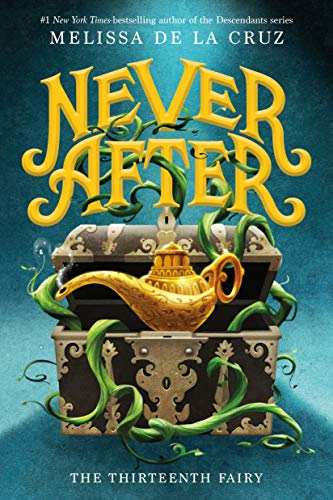 Never After: The Thirteenth Fairy (The Chronicles of Never After #1)

Filomena Jefferson-Cho, 12, is a huge fan of epic fairy tale mash-up series Never After, and she’s anticipating the release of the 13th and final volume—until she learns that the long-deceased author apparently never wrote it. When the saga’s hero, Jack the Giant Stalker, appears in her quiet hometown of North Pasadena, pursued by an ogre, she discovers that everything described in the books is true. Inadvertently accompanying Jack back to the lands of Never After, Filomena is swept up in a struggle between good and evil occurring in both worlds. The adopted daughter of interracial parents who has “curly dark hair, dark brown eyes, and skin the color of maple syrup,” Filomena suffers bullying at school, making “escaping her world... one of her favorite pastimes.” In this fantasy series opener, de la Cruz (Gotham High) plays with familiar fairy tale elements—riddles, quests, fantastical characters—while throwing in a heavy dose of wish fulfillment. The story stumbles somewhat where the two worlds overlap, and though late developments truncate their own emotional heft, it’s a fast-paced fantasy that Land of Stories fans will enjoy. Ages 10–14. [em]Agent: Richard Abate, 3Arts Entertainment. (Dec.) [/em]

Correction: This review has been changed to reflect an update to the book's final text.