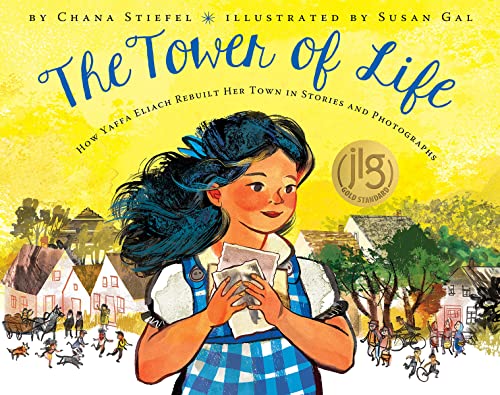 The Tower of Life: How Yaffa Eliach Rebuilt Her Town in Stories and Photographs

The creators center the experiences of historian Yaffa Eliach (1935–2016) in this moving look at the creation of the United States Holocaust Memorial Museum’s Tower of Faces, a monument built of photographs. Early lines paint an idyllic vision of Eliach’s birthplace, the shtetl Eishyshok. Gal’s saturated ink, watercolor, and digital collage illustrations show the deeply rooted community, which “pulsed with love, laughter, and light” and was often caught on camera by Eliach’s grandmother. When German troops and tanks arrive, the book’s palette darkens into harrowing wartime graphics. Following details around Yaffa’s family’s escape, the text next shifts to the subject’s 17-year global effort to recover 6,000 photos from those with family history in Eishyshok, and a concluding spread pays powerful tribute to the resulting memorial: “The photos showed heroes, not victims. Dignity, not disaster. Lives lived, not lost.” A timeline and bibliography conclude. Ages 6–8. (Oct.)

Correction: The text of this review has been updated for clarity.