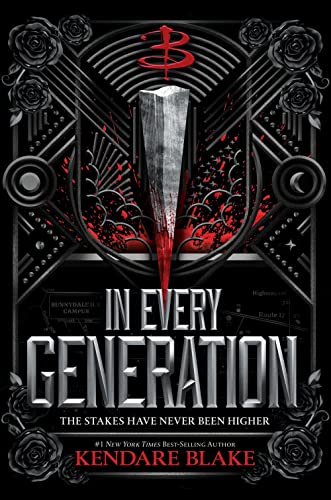 Blake’s (All These Bodies) trilogy opener set in the Buffy the Vampire Slayer universe centers a new generation of Slayers. After a bombing at Slayerfest, “regular gatherings of all the remaining Slayers,” decimates existing Slayers and leaves the fate of Buffy unknown, white teen Frankie Rosenberg—daughter to Willow Rosenberg—finds her Slayer abilities awakening. When “lanky and pale” Slayer Vi Larsson disappears after the same event, her half sister Hailey, a 16-year-old of Canadian and Saulteaux First Nations descent, goes searching for answers. Hailey soon ends up in New Sunnydale as a part of a new Scooby Gang with Slayer Frankie and werewolf Jake Osbourne, where they try to solve the mystery of the bombing and the recent crop of vampires in town. The explanations of show references might feel clunky to fans, but readers new to the franchise will appreciate the additional context. Blake successfully employs quippy one-liners that capture the tone and humor of the original Buffyverse while bringing it to a modern era. Though the ending satisfactorily utilizes the show’s “monster of the week” format, it also strikes an uneven balance with the greater mystery of who caused the Slayer explosion, in this entertaining addition to the Buffy canon. Ages 12–up. Agent: Adriann Ranta Zurhellen, Folio Literary. (Jan.)■

Correction: A previous version of this review misidentified Willow Rosenberg.