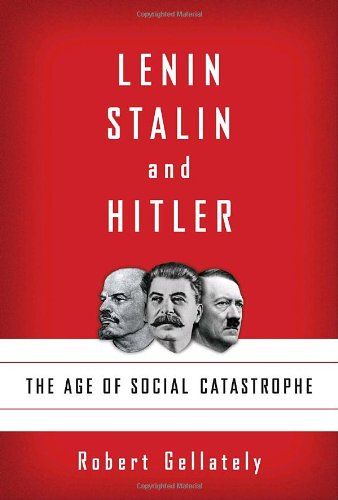 Lenin, Stalin, and Hitler: The Age of Social Catastrophe

Historian Gellately's ( ) new work insists on Lenin's inclusion in any effort to understand the two major and deadly dictatorships of 20th-century Europe, Soviet communism and Nazism. Every horrendous act of the Stalin era had been seeded by Lenin, the author argues. Moreover, the Soviet and Nazi systems developed in tandem, each carefully eying the other, learning from each other, as they both reached an apex of brutality and terror. In developing this analysis, Gellately provides informed but somewhat plodding accounts of the two systems. Not all of the arguments stand up to scrutiny. “In the 1930s, the struggle between Communism and Nazism became a deadly rivalry for world domination,” the author writes. But in the 1930s Stalin cared for little beyond the Soviet Union and was hardly bent on global conquest. Gellately's approach is relentlessly one-sided in its focus on ideology as the causative factor in history. Even the civil war that followed the Bolshevik revolution is treated as backdrop for the implementation of ideology, rather than as an earthquake-like event that well into the 1950s shaped the thinking of Soviet leaders. Gellately is better on the Third Reich, but overall this is an unsatisfying and uninspired history. 16 pages of photos.