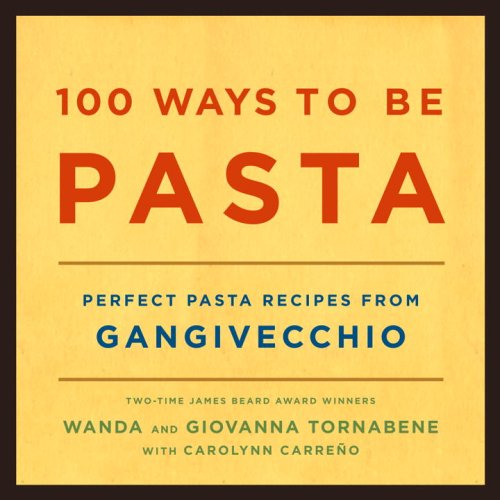 100 Ways to Be Pasta: Perfect Pasta Recipes from Gangivecchio

Pasta's very simplicity can sometimes trip up cookbook authors. After all, how many recipes for spaghetti with tomato sauce does one need? Mother and daughter Wanda and Giovanna Tornabene easily skirt this issue with inventive dishes such as Tagliolini with Green Apple Pesto and Speck, and Ditaloni with Eggplant Balls, Potato, and Pancetta. To coauthor Carreño's credit, the voices of these two women, who run a restaurant in a 13th-century Sicilian abbey, remain genuine and convincing throughout. They demonstrate that cuisine can be inventive without involving backbreaking labor: in a recipe for Bucatini with Dried Figs, for example, they explain that they purchase dried figs rather than drying their own, "a boring and tedious task." In a charming sidebar, they describe the pasta they prepare for their dogs and cats twice a day. There's a distinct Sicilian flavor throughout, which means less of an emphasis on handmade egg pasta (Papa's Ricotta Ravioli with Simple Butter Sauce is one exception) and an homage to the classic Lampedusa novel in the form of a timballo that mimics one served in a prince's home in the novel, as well as a version of Sicily's Famous Spaghetti with Eggplant and Ricotta Salata. Recipes are clearly written and divided into types, such as rich pasta, one-dish pasta, soup with pasta, etc. The Tornabenes' (Knopf, 1996) and (Knopf, 2001) were James Beard Award winners; this new addition looks like another potential champion.