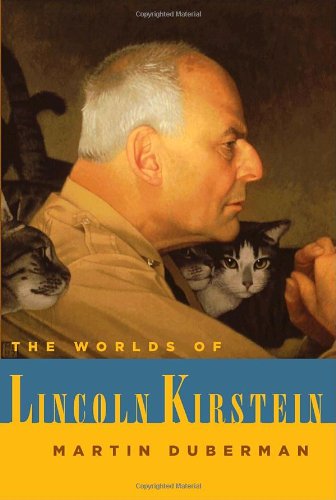 The Worlds of Lincoln Kirstein

A central figure in 20th-century American modernism, Lincoln Kirstein (1907–1996) edited a pioneering literary magazine and was the driving force behind George Balanchine's revolutionary New York City Ballet. Bancroft Prize–winner Duberman ( ) reveals in his absorbing biography a man blessed, agonizingly, with great artistic taste and vision unaccompanied by artistic talent. Born of a wealthy Jewish family but unable to personally finance his many schemes, Kirstein became a frenzied impresario of the avant-garde, perpetually sweating out budget shortfalls and opening night reviews and pestering philanthropists for funds to bring high-brow dance to suspicious but increasingly receptive American audiences. His was a high-wire life—despite artistic triumphs, NYCB teetered on the brink of bankruptcy for decades—sustained by a stupendous manic energy (later darkening into demented fits that necessitated electroshock) and enlivened by a parade of lovers of both sexes, including his own brother. Kirstein met everyone from Martha Graham to General Patton. Through Kirstein's funny, perceptive diary jottings and letters, Duberman paints an engaging portrait of bohemian New York and its high-society patrons. Kirstein's tornado life and crazy-quilt projects can be bewildering, but Duberman conjures an indelible sense of a creative urge that became a tortuous pilgrimage toward an enigmatic muse. 36 pages of photos.