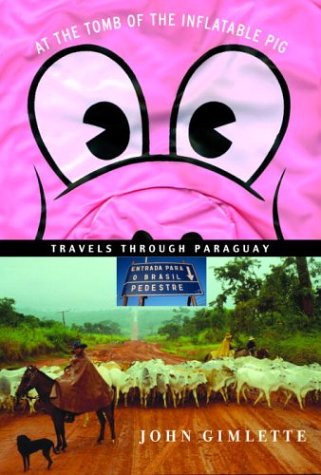 AT THE TOMB OF THE INFLATABLE PIG: Travels Through Paraguay

Over the past 500 years, Paraguay has been invaded by successive waves of conquistadors, missionaries, Mennonites, Australian socialists, fugitive Nazis and, perhaps most improbably, Islamic extremists. "An island surrounded by land," bordered by vast deserts and impenetrable jungles, Paraguay is a country uniquely suited for those seeking to drop out of sight or, like Gimlette, find themselves. The author was 18 when he first traveled to Paraguay more than two decades ago; return visits only deepened his appreciation for the nation and its tragicomic past. Gimlette seems to have gone everywhere and talked to everyone. He boats down piranha-infested rivers, hobnobs with Anglo-Paraguayan socialites and hunts down the former hiding place of notorious Auschwitz doctor Josef Mengele. Gimlette, a travel writer and lawyer in London, proves a chatty, amiable guide to local institutions like the national railway (which has no running trains) and native wildlife, like the fierce, raccoon-like coatimundis (who, Gimlette writes, "make up for their absence of pity with fistfuls of dagger-like claws"). Yet he doesn't shirk from the nastier aspects of Paraguay's bloody history. Gimlette describes in horrific detail, for example, the rape and conquest of the Guarani Indians as well as the brutally repressive regime of Don Alfredo Stroessner (whose U.S.-backed dictatorship lasted longer than any other in the Western Hemisphere). Gimlette could have used some judicious editing—the narrative drags in parts, and its scattered chronology can be confusing—but he never fails to impress with his ingenuity, sincerity and sense of humor. 16 pages of color and b&w photos, not seen by .