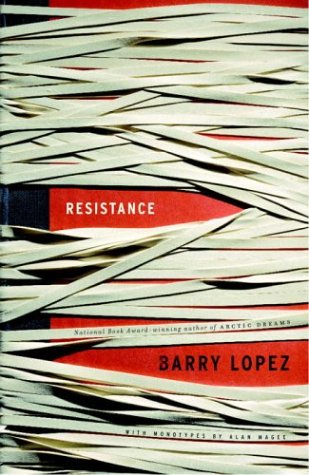 Lopez, author of the National Book Award–winning and numerous other works of fiction and nonfiction ( ; ; etc.), explores opposition and defiance—to globalization, xenophobia, political and cultural hegemony, conspicuous consumption, environmental degradation—in a slim, brooding collection of timely fictional testimonials. "Apocalypse" sets the stage, as an American curator living in France receives an ominous official letter from "Inland Security," expressing "widespread irritation with our work, and the government's desire to speak with us." Through coded e-mails, he determines that all over the world, friends similarly engaged in "chip[ping] away like coolies at the omnipotent and righteous façade" have received the same missive. They agree to vanish, leaving behind a record of their political and spiritual awakenings. In "Mortise and Tenon," a land activist and carpenter reflects on his years of travel, his childhood abuse and an act of terrible violence that put him on a new path toward healing. Vietnam left the narrator of "Traveling with Bo Ling" a "blind eunuch with a face of melted wax," but through the love of a Vietnamese woman, he learns to seek knowledge and experience. In "The Bear in the Road," an attorney searching for a spirit guide in the form of an elusive Plains grizzly struggles with issues of responsibility and inner peace. Many of the nine narrators are wanderers; all of them move toward self-knowledge and engagement; each relates his or her story in the same reserved, dignified voice. Passionate in feeling but cool in rhetoric, these testimonials feel like haunting fragments of committed lives; though not always satisfying as straight fiction, they are powerful as artistic argument, suggesting that resistance is the natural state of the conscious and thoughtful. With nine monotypes by Alan Magee. .