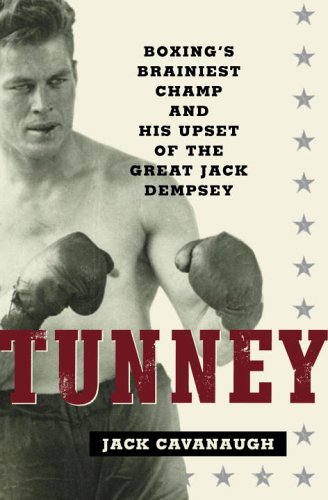 Tunney: Boxing's Brainiest Champ and His Upset of the Great Jack Dempsey

On September 23, 1926, in Philadelphia, Gene Tunney easily defeated Jack Dempsey for the title of heavyweight champion of the world, and in this exhaustively researched work, sportswriter Cavanaugh makes an excellent case for Tunney's undervalued prowess as a fighter. Dempsey was the Mike Tyson of his era, and his beating at the hands of the defense-minded, Shakespeare-quoting Tunney shocked the boxing cognoscenti. Exactly 364 days later, Tunney beat Dempsey again in the famous "Long-Count" match, one of the most controversial in the history of the sport. The two fights, vividly recounted by Cavanaugh, marked a pinnacle of popular success for boxing (which in the preceding decades had been illegal in much of the country), drew the largest crowds of any sporting event at that time and made the principals the most highly paid athletes in the world. Ironically, the losses only increased the popularity of Dempsey, who until then faced accusations of being a greedy draft dodger. In victory, however, Tunney proved to be an unpopular champion both with sportswriters and the American public, who like their heroes more common-minded. After successfully defending his title once more, Tunney took his millions, married an heiress and settled down in Greenwich, Conn. Cavanaugh brings alive an era when boxers fought more in a year than they do now over entire careers.