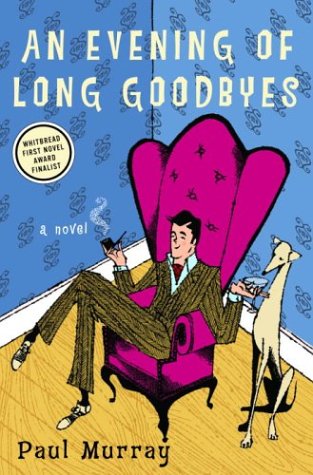 AN EVENING OF LONG GOODBYES

If Wodehouse's Bertie Wooster were plopped into the 21st century, his adventures might resemble those of Charles Hythloday, the buffoonish hero of Murray's insouciant romp, shortlisted for the Whitbread. For three years, ever since his father died, 20-something Charles has been pottering around the family's crumbling seaside estate near Dublin, mixing himself gimlets and watching old movies. He sees himself as attempting to perfect , "the contemplative life of the country gentleman, in harmony with his status and history"; his formidable sister, Bel, and everyone else, however, view him as a shiftless drunkard, and Charles's own narration leaves little doubt whose judgment is more accurate. The reappearance of Charles's mother, who's been away at a clinic for alcoholics and is now determined to reform the rest of the family, means that his allowance is promptly cut off and he's required to get a job. This proves to be predictably difficult (a tech recruiter says, " 'So in short, Charles, it's fair to say you've worked for a living, is that right?' "). Meanwhile, the family's Bosnian housekeeper smuggles her grown-up children into the country, and Bel starts a theater company at Amaurot with the housekeeper's striking daughter, Mirela, who's much too clever for smitten Charles. Murray's blend of drawing-room comedy and postindustrial hilarity is deft and jaunty, and well-timed snippets of foreshadowing keep the story moving briskly. If the characters occasionally seem too broadly drawn, they always operate in service to the novel's witty and satirical aims. This is a breezy, highly entertaining read.