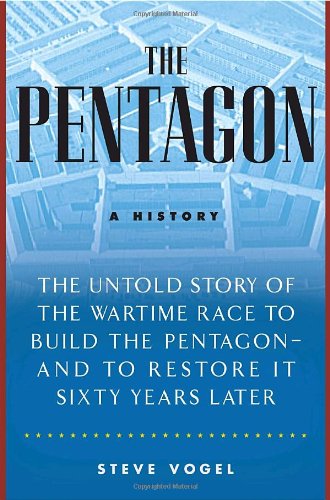 The Pentagon: A History

Washington Post journalist Vogel provides an incisive history of the Pentagon both as an architectural construct and as an American symbol, though not as an institution. Vogel traces the politics and design considerations involved in planning a new home for the previously scattered War Department (forerunner of today's Department of Defense) in the early 1940s. Wartime conservation subsequently forced builders to use the least amount of steel possible, and much concrete. The “Stripped Classical” building—erected in 16 months at a cost of $85 million—was made with five sides chiefly because it lay on remnant acres between five appropriately angled roads. At the time, it was a massive undertaking: five concentric rings of offices, 17.5 miles of corridors and a five-acre central courtyard. Vogel demonstrates how planners conceived the structure as fitting into L'Enfant's original plan for Washington, D.C., and goes on to depict it as a national icon. In this vein, Vogel describes the building as a target for protesters during the Vietnam War (with special attention to October 1967's March on the Pentagon, immortalized in Norman Mailer's Armies of the Night), and, of course, the 9/11 attack. Throughout, Vogel artfully weaves architectural and cultural history, thus creating a brilliant and illuminating study of this singular (and, in many ways, sacred) American space. Photos. (June 5)