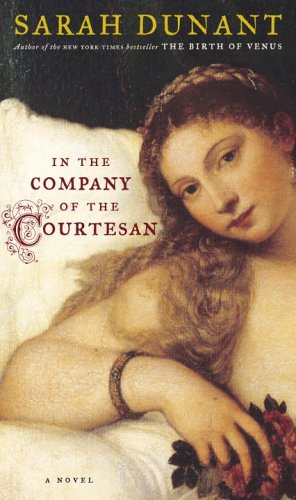 In the Company of the Courtesan

Renaissance Italy enchants in Dunant's delicious second historical (after ), as a wily dwarf Bucino Teodoldo recounts fantastic escapades with his mistress, celebrated courtesan Fiammetta Bianchini. Escaping the 1527 sacking of Rome with just the clothes on their backs (and a few swallowed jewels in their bellies), Fiammetta and Bucino seek refuge in Venice. Starved, stinking, her beauty destroyed, Fiammetta despairs—but through cunning, will, Bucino's indefatigable loyalty and the magic of a mysterious blind healer called La Draga, she eventually recovers. Aided by a former adversary, who now needs her as much as she needs him, Fiammetta finds a wealthy patron to establish her in her familiar glory. Through Bucino's sharp-eyed, sharp-tongued narration, Dunant crafts a vivid vision of Venetian life: the weave of politics and religion; the layers of class; the rituals, intrigue, superstitions and betrayals. Dunant's characters—the steely courtesan whose glimpse of true love nearly brings her to ruin; the shrewd and passionate dwarf who turns his abnormalities into triumph; and the healer whose mysterious powers and secrets leave an indelible mark on the duo—are irresistible throughout their shifting fortunes.