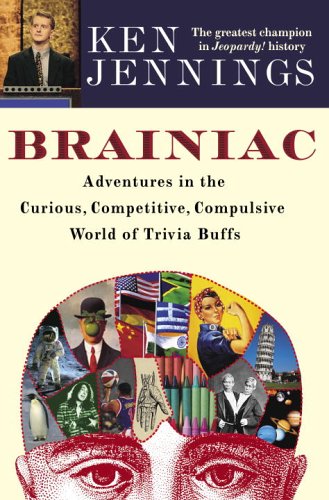 Did you know that Trivia was a Roman name for the goddess Hecate or that tapes a week's worth of shows in a single afternoon? Jennings's record-setting 2004 six-month stint on the syndicated TV quiz show won him $2.5 million and instant fame as he landed on Letterman, Leno, and Barbara Walters's "Ten Most Fascinating People" list. Sprinkling trivia questions throughout his first book, the former computer programmer is a charmingly self-deprecating guide to the subculture of esoterica as he relates how he answered his first trivia question about the Wright brothers at four and made his chops on the ego-driven college quiz bowl circuit; confides how he mastered the "tricky" buzzers; bonds with professional trivia writers; and describes being bested by the puzzler "Most of this firm's seven thousand seasonal white-collar employees work only four months a year" (Jennings answered FedEx; H&R Block is correct). You don't have to be a couch potato to answer this: what's an eight-letter word for a highly entertaining, fast-paced read that demystifies "America's most popular and most difficult quiz show" while pondering how trivia is a cultural phenomenon that offers a tidy alternative to life's messiness as well as instant camaraderie between people from different walks of life?