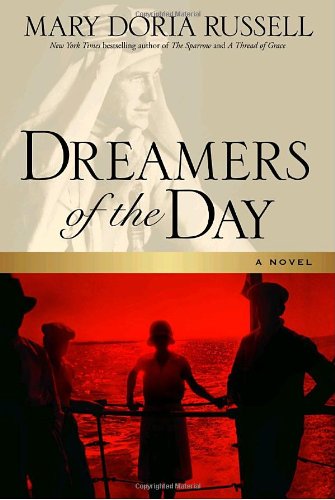 Dreamers of the Day

Russell's enjoyable latest historical is told in the exuberant, posthumous voice (yes, it's narrated from the afterlife) of Agnes Shanklin, a 38-year-old schoolteacher from Cedar Glen, a town near Cleveland, Ohio. After the influenza epidemic of 1919 strikes down Agnes's family, a childless and unmarried Agnes settles the family estate, acquires financial independence and adopts an affable dachshund named Rosie. Accompanied by Rosie, Agnes travels to Cairo during the Cairo Peace Conference, where she befriends Winston Churchill and Lawrence of Arabia among other historical heavy hitters. She also falls in love with the charismatic Karl Weilbacher, a German spy whose interest in Agnes may have less to do with romance than Agnes will allow herself to believe. Agnes's travelogues, while marvelously detailed, distract from the increasingly tense romantic play between Agnes and Karl. When a more worldly-wise Agnes returns home, her lifeâ€”first as an investor wrecked by the Depression and then a librarian until her death in 1957â€”remains low-keyed. Though the bizarre, whimsical ending doesn't quite gel, Russell ( ; ) has created an instantly likable heroine whose unlikely adventures will keep readers hooked to the end.