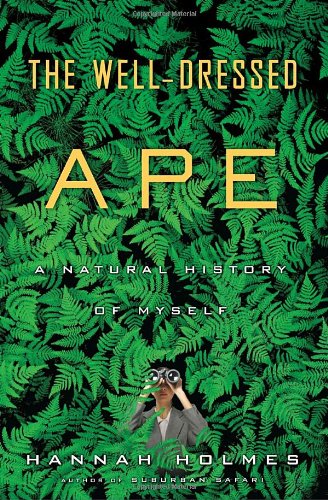 The Well-Dressed Ape: A Natural History of Myself

Holmes ( ) has been “uncomfortable with the notion that I was an animal apart, a sort of extraterrestrial on my own planet.” Hence, she examines her “animal self,” hoping to “clarify my identity in the natural world.” As in her previous works, she uses the mundane to make larger points about life and the human condition. Beginning each chapter in a scientific mode, she then glides into more personal reflections (“I’m most aware of my brain when I encounter its limitations”) and then compares humans with other animals: “My wad of wiring is so hot and bothered that it puts all the world’s other brains to shame. Or does it?” Holmes thus continually underscores that humans are not nearly as different as many would have us believe. For example, a surprising number of species communicate fairly well, and prairie dogs actually have a sizable vocabulary. Holmes’s optimistic conclusion is that we are the only species capable of thinking about the effect of our actions and acting against narrow self-interest, even if we don’t always do so. Holmes makes the scientific personal in prose that is juicy and humorous, if occasionally a bit too cute.