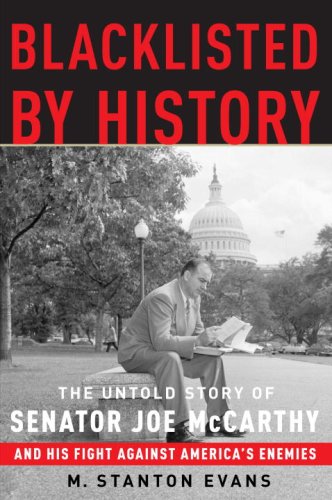 Blacklisted by History: The Untold Story of Senator Joe McCarthy

Evans's lively book seeks, first, to demonstrate that Communists worked, often successfully, to undermine American security during the Cold War. It tries, second, to defend Sen. Joseph McCarthy, the egregious scourge of American Communists and fellow travelers, against those who, in Evans's ( ) view, have unjustly ruined his reputation. On the first point, save for some new details, Evans, a contributing editor to , treads worn ground. Most scholars, having also used Soviet archives, concede his position and argue now only over secondary matters, like the guilt of Alger Hiss. On the second point, Evans has a tougher case, which he seeks to make as a defense attorney would: by conceding nothing to McCarthy's detractors. Evans is also given to conspiracy thinking—an approach that, by its nature, yields claims that can neither be confirmed nor falsified. Defense attorneys and debaters like Evans follow different rules than historians—they try to score points, not to advance knowledge. Evans is good at the former, his propulsive style carrying much of the argument's burden. But the history Evans relates is already largely known, if not fully accepted.. 20 illus.