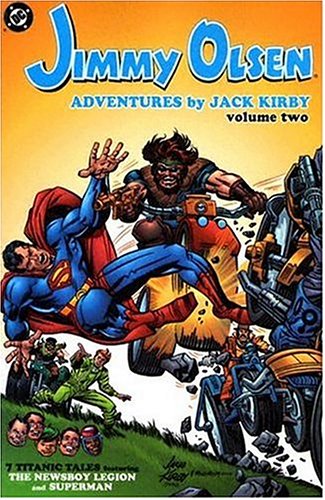 Kirby is generally considered the most influential artist in the history of comics, and these stories show him at his feverishly apocalyptic best. After his historic run at Marvel in the '60s, Kirby moved to DC Comics, where the work he produced influenced everything from to . In these stories, which initially appeared in 1971 and 1972, he uses Superman's human pal Jimmy Olsen as a gateway to fantastic tales that always spin off in unexpected directions and pile on wild ideas. A vampire attacking one of Jimmy's co-workers turns out to be from a miniature world created in a lab, where he was educated by a constant stream of horror movies. A search for a Loch Ness monster–like beast turns into a battle against alien overlords and finds Jimmy regressing to a caveman state. While the dialogue of the era displays shameless comic book cliches—"Jumping jars of jellied jaguars!" Jimmy shouts at one point—it turns out not to be dated, kind of like Krazy Kat's argot (and Kirby's restless imagination and powerful artwork will propel readers over any rough spots). Fans will welcome this new collection, and newcomers will learn where many pop culture icons come from and discover an original artist.