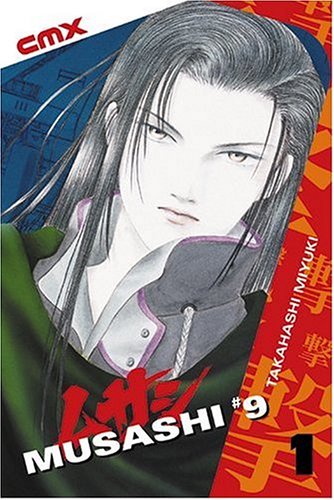 This intriguing series follows an androgynous and lethal 16-year-old girl with the code name Musashi #9, an agent for the ultra-secret organization Ultimate Blue. The UB is also known as "the other United Nations" and has positioned itself above international law in the fight to maintain order against terrorists, extremists, kidnappers and others whose activities threaten to lead to world chaos. The UB swiftly confronts these threats, sending out merciless, coldly efficient agents whose existence is shrouded in shadow and rumor; among them, no agent is as feared as Musashi #9. This first book in the series recounts four of Musashi #9's missions, focusing on the predicaments of those Musashi #9 is sent to protect, the nail-biting suspense that comes as the situations escalate and Musashi #9's entry into the game disguised as a stylish young man. Once she has her targets in sight, she easily overcomes her antagonists. Takahashi crafts a tight narrative that moves as briskly as a well-paced espionage thriller, and the rather feminine manga art style curiously works in the story's favor, offering a delicate counterpoint to the tense and often violent plots. This is a series worth watching, and it will be fascinating to see Musashi #9's origin explored in future installments.