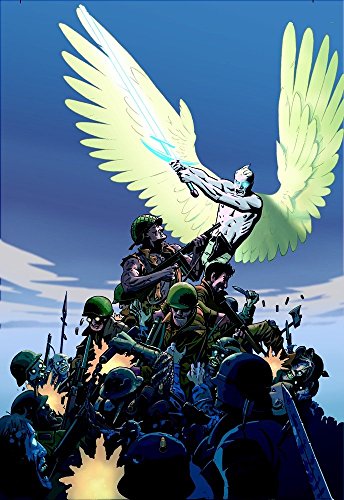 This collected edition of a four-issue 2004 miniseries may be the best mainstream comic of the year, an outstanding achievement at all levels. The German troops who overrun an isolated pocket of U.S. soldiers during the winter of 1944–1945 are worse than Nazis; they're the descendants of fallen angels who now see a chance to steal the sword of God. The surviving Americans, led by an immortal Roman centurion in disguise, must fight these supernatural, almost-indestructable foes. The premise is reminiscent of Garth Ennis's gonzo , but Tomasi takes it seriously and makes the struggle emotionally resonant. His heroes are convincingly uncertain but persistent; the villains are monstrous but not altogether unsympathetic. Even the coldly smiling leader of the evil hoard gets to display his simple yearning to soar into pure light. What really makes the story work, however, is Snejbjerg's art, complemented by Bjarne Hansen's sensitive coloring. Exterior scenes use quiet, open space, snowy landscapes or winter shadows in a forest. When the action contracts into hyperviolent battle scenes, the effect is jolting. The stunning art and the extreme story fit together perfectly to tell a tale that probably couldn't have been told at all outside the comics medium.