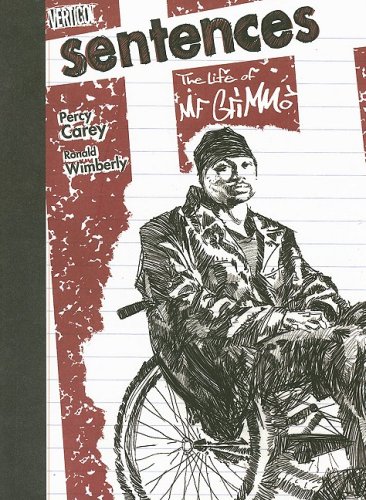 Black, white and gray are the appropriate palette for this somber autobiographical narrative. Carey covers his experiences from his years as a child performer on through hip-hop stardom as “MF Grimm.” His simultaneous life as a dope dealer leads to a darker turn, as a drug-feud ambush leaves him paralyzed from the waist down. The story follows his subsequent time in prison and his current career as an entertainment producer. Along the way, he gives glimpses of the mother who fiercely defended him and the neighborhood that nurtured him, but he gives more stress to his exploits as a thug, his meetings with hip-hop stars he considered rivals and/or peers, and the hunger for money and recognition that led him to take dangerous risks. Wimberly's art reinforces Carey's raw script—solid dark masses engulfing graceful, jittery linework in the style of Eduardo Russo's , but the full impact of Carey's experiences doesn't come through. So many things are happening that it's hard to remember who's doing what to whom, and why it matters. That's unfortunate, because Carey to make his life meaningful as he urges young readers to choose something besides “guns ands crime.”