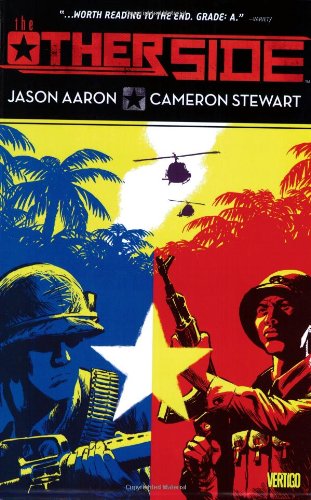 war comic without heroism, Aaron and Stewart's uneven tale alternates sequences about two teenagers—red-blooded American Bill Everette and patriotic Vietnamese Vo Binh Dai—as they leave their homes and families and move toward the battlefield where each of them hopes to kill the enemy during the Vietnam War. Everette, drafted into a cynical, vulgar-mouthed, vulgar-minded platoon of Marines, desperately wants to survive, while Vo, a Buddhist who's slightly too idealistic to believe, longs to make a meaningful sacrifice for his national cause. The two combatants hallucinate constantly about death and decay; as the conflict enters the evocatively drawn landscape of the siege at Khe Sanh, the tone shifts from lurid grossness to bleak, smothering horror, and its stylized violence is sometimes hard to bear. Both Aaron's script and Stewart's crisp, impressionistic artwork (convincingly evoking the landscapes of the country and jungle, and colored in a palette that's mostly bloody reds and rotting greens) revolve around contrasts and reflections. But the title isn't just a reference to the opposing army: it suggests the way each of its protagonists is transformed, and loses his humanity by the process of being trained to kill.