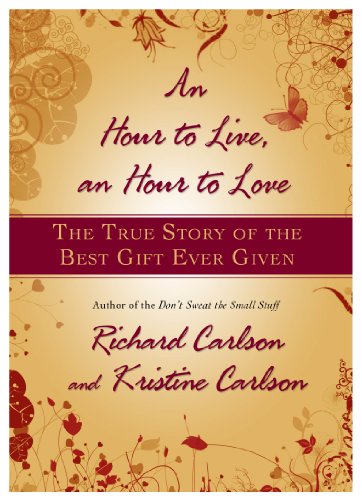 On their 18th wedding anniversary, in 2003, Richard Carlson (author of the bestselling ) presented his wife, Kristine, with a short manuscript called â€œAn Hour to Live.â€ He imagines he has an hour to live and poses questions originally asked by spiritual guide and author Stephen Levine: whom would you call? what would you say? and why are you waiting? Uncannily, the text foreshadowed Carlson's death three years later, at age 45, of a pulmonary embolism. Though he had no chance to make that last phone call, his wife (and the reader) already knows his feelings for her and their children. We also know what was important to him, which boils down to the old chestnut: no one, on their deathbed, ever wishes they'd spent more time at the office. Included in the book is Kristine's tribute to Richard, called â€œAn Hour to Love.â€ Both pieces (only 50 pages and padded with â€œRichard's favorite poemâ€ and blank pages for the reader's own answer to the key question) are heartfeltâ€”and oddly unengaging. They tell the reader how wonderful the Carlsons' marriage was, but don't show why. We are left with a lovely idealâ€”too ideal for readers to relate to.