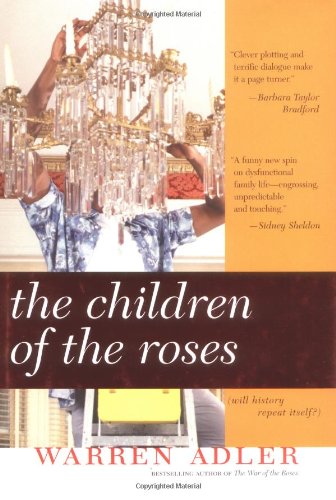 THE CHILDREN OF THE ROSES

Adler recreates the epic marital bickering that made the original (1989) such juicy movie material, but this tepid sequel pales despite the potential offered by the troubled marriage of Josh Rose, the son of the spouses who were killed by a falling chandelier after squabbling their way through the first book. Josh has all the trappings of success—a satisfying job as creative director of a Manhattan ad agency, two beautiful children and a gorgeous albeit icy wife, Victoria, a former lawyer who was also damaged by her parent's bitter divorce. His stability is threatened, however, when he succumbs to the temptations of his chief designer, a married woman named Angela Bocci whose passion for risqué semi-public sex leads to a hot affair. Josh manages to hide his infidelity from Victoria as the couple struggle to keep their 11-year-old son, Michael, from being thrown out of an elite private school for a petty thievery incident. But all is lost when Angela's spouse, Dominic, tries to use the affair to blackmail Josh before revealing Josh's infidelity to Victoria, who is blackmailed into a separate series of erotic shenanigans by Michael's diabolical headmaster. Adler scores points with sly irony in the early infidelity chapters, but the story flattens when Angela demands a divorce and the couple's joint custody experiment begins. The generic bickering leads to an outrageous climax in which a near-tragic house fire causes the couple to rethink their separation; the sappy, over-the-top ending comes off as a half-baked attempt to outdo the savage humor of the original. There are some funny moments as Adler sets up his marital chess pieces, but this follow-up succumbs to sequelitis.