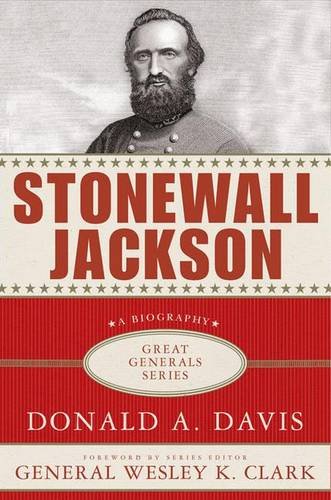 This reverential biography of Jackson is the latest in Palgrave’s Great Generals series, but it’s not as concise as its slim volume might suggest. An obscureinstructor at Virginia Military Institute, Jackson was approaching middle age when he joined Confederate forces at the outbreak of the Civil War. He acquired his nickname, Stonewall, after an admirable stand at the first Battle of Bull Run. Transferred to nearby Shenandoah Valley, he made headlines as far away as Europe with a brilliant, fast-moving campaign that befuddled far larger Union forces. He returned to the main body of Lee’s command, where his crushing assault was a crucial victory in the second Battle of Bull Run, followed by his legendary flank attack that routed Union forces at Chancellorsville. Author Davis ( ) dutifully relates Jackson’s unlegendary generalship on the Peninsula and at Fredericksburg, but like many Confederate hero biographers, his unrestrained admiration leads to purple prose (“The blue eyes of Stonewall Jackson again blazed with excitement”). Those seeking more insight into Jackson will find Byron Farwell’s 1992 biography longer, but more rewarding.