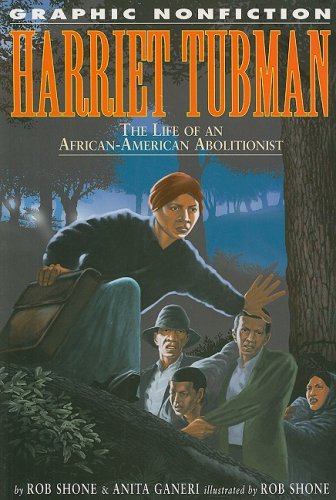 HARRIET TUBMAN: The Life of an African-American Abolitionist

Tubman's long life story is impressive for the range of its determination: the former slave set out to help in trouble, whether it was other slaves, wounded Civil War soldiers or the homeless poor. One potential problem with such a career is that it's so full of incidents that it's hard to fit all of them into a short book without merely listing accomplishments. By the same token, this graphic nonfiction work's art tends to suffer when text fills nearly every page. Shone and Ganeri's script partly overcomes this by fitting much of the action into a story the elderly Tubman tells to young visitors; that makes it possible to condense several Underground Railroad trips into one tense narrative. Shone's art also makes the most of the space available, sometimes using comics techniques that go beyond merely illustrating the text. Readers who want a drink of History Lite may find this work fairly satisfying.