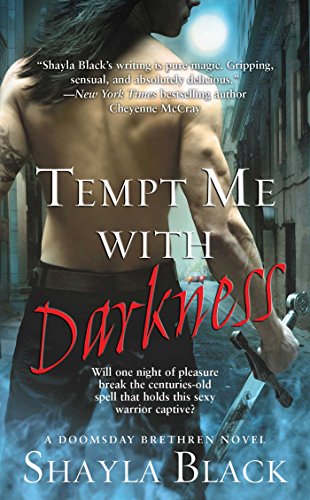 Tempt Me with Darkness

More than , the debut of Black’s Doomsday Brotherhood series introduces Marrok of Cadbury, who was a brave warrior in King Arthur’s army until his unhappy lover, Morganna le Fay, cursed him with immortality and perpetual sexual frustration. Fifteen centuries later, Marrok is working as a sculptor in London and searching for a way to unlock Morganna’s nasty little book of spells, the Doomsday Diary, though he’s not sure he can break the curse without unleashing the book’s deadly magic. Marrok also has to hide the Diary from villainous wizard Mathias d’Arc (“Cruel, clever, hedonistic, rapacious. Brilliantly evil.”) and decide whether beautiful art gallery owner Olivia Gray, Morganna’s descendant, is his greatest nemesis or his sexual salvation. This orgasmic paranormal might make T.H. White turn over in his grave but will keep Black’s fans panting for the next installment.