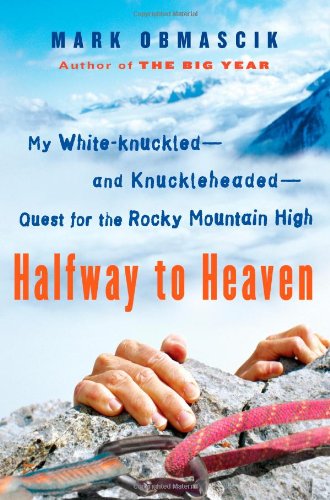 Halfway to Heaven: My White-knuckled—and Knuckleheaded—Quest for the Rocky Mountain High

In this hilarious midlife picaresque, journalist Obmascik ( ) set himself the goal of climbing all 54 Colorado mountain peaks that are higher than 14,0000 feet because it was both hard, and not too hard—thousands have completed the technically undemanding circuit. He hit the gym, pared two pounds from his flabby frame and spent a summer plodding and wheezing up the “fourteeners,” trying to keep up with the better-conditioned women and older men who cruised past toward the summits. Obmascik dodged lightning bolts, took a few hair-raising tumbles, admired the majestic scenery and experienced the exaltation of having truly earned his post-climb bacon double-cheeseburgers. Above all, he bonded with his “man-dates”—male climbing partners who head to the hills seeking refuge from woman troubles, fear of needles and numbing desk jobs. Their slightly feckless masculinity harmonizes with the shaggy-dog stories the author sprinkles in about the miners, cannibals and odious Texans who populate Colorado's mountain lore. Instead of the rarefied spirituality of typical mountaineering narratives, Obmascik's saga revels in off-color jokes and humiliating pratfalls; the result feels like a raucous bowling night, with moderate oxygen deprivation, on the brink of an abyss.