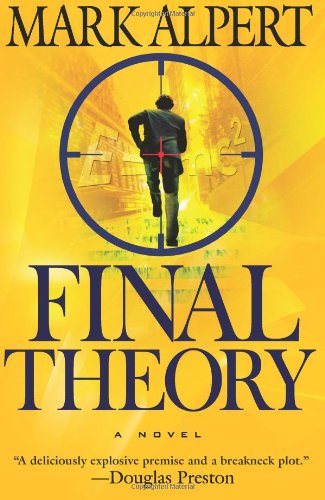 Alpert’s exciting debut takes the premise that Albert Einstein succeeded in discovering a unified field theory, but hid the result, fearing it could lead to weapons far more powerful than the atom bomb. In the present day, several contenders—the U.S. government, a savage mercenary bent on revenge, various scientists—all scramble to uncover the theory. Theoretical physicist Hans Kleinman, once one of Einstein’s assistants, is tortured by an intruder who demands he divulge the theory. Columbia University professor David Swift is at Kleinman’s bedside when the old man makes a few cryptic statements, imparts a string of numbers and then dies. Soon David is off and running for his life, as all the theory seekers give chase. David stays one step ahead with the help of the beautiful Monique Reynolds, another physicist. Alpert, a columnist, sticks to proper thriller structure while imparting interesting and accessible science. The relentless action, including one giant twist and plenty of smaller ones, builds to a pulse-pounding conclusion.