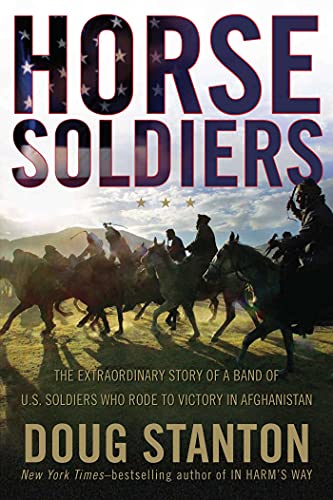 Horse Soldiers: The Extraordinary Story of a Band of U.S. Soldiers Who Rode to Victory in Afghanistan

In this absolutely riveting account, full of horror and raw courage, journalist Stanton (In Harm's Way) recreates the miseries and triumphs of specially trained mounted U.S. soldiers, deployed in the war-ravaged Afghanistan mountains to fight alongside the Northern Alliance-thousands of rag-tag Afghans who fought themselves to exhaustion or death-against the Taliban. The U.S. contingent, almost to a man, had never ridden horses-especially not these ""shaggy and thin-legged, and short... descendents of the beasts Genghis Khan had ridden out of Uzbekistan""-but that was not the only obstacle: rattling helicopters, outdated maps, questionable air support and insufficient food also played their parts. Stanton brings each soldier and situation to vivid life: ""Bennett suddenly belted out: 'It just keeps getting better and better!' Here they were, living on fried sheep and filtered ditchwater...calling in ops-guided bombs on bunkers built of mud and wood scrap, surrounded by Taliban fighters."" In less than three months, this handful of troops secured a city in which a fort had been taken over by Taliban prisoners, a tangle of firefights and mayhem that became a seminal battle and, in Stanton's prose, a considerable epic: ""Dead and dying men and wounded horses had littered the courtyard, a twitching choir that brayed and moaned in the rough, knee-high grass.""
close
Details