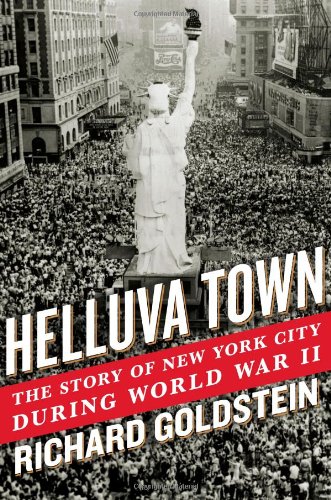 New York is big, and much of this swaggering, nostalgic history recounts the sheer size of the city's contribution to the Allied victory: the prodigies of shipbuilding and repair at the Brooklyn Navy Yard; the 81,000 WAVES churned out at Hunter College; the millions of soldiers sent overseas from New York's harbor after consoling themselves with America's glitziest nightlife. But the story's New Yorkness doesn't resonate from the grand logistics or the war stories—wan spy capers, the accidental shelling of Wall Street, the bomber that crashed into the Empire State Building—with which -man Goldstein ( ) bombards us. More evocative are his accounts of how the upheaval became fodder for the city's efflorescent culture. Insouciant Manhattanites partied in the streets during civil defense drills instead of taking cover; Broadway tunefully repurposed patriotic and martial themes in and ; and at the Stage Door canteen, a nightclub for servicemen staffed by celebrities, a GI could score a dance with Lauren Bacall. In these engaging vignettes, New York—lively, brave, humane—conquers not just the Axis but war itself.