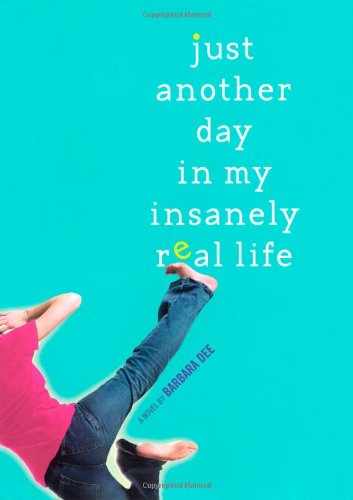 Just Another Day in My Insanely Real Life

Dee makes an impressive debut with this achingly real novel narrated by a 12-year-old who is valiantly trying to cope with upsetting changes in her life. After Cassie's father moved away for a mysterious reason (later disclosed), the family sold their house and now lives in a "ratty old condo development." Since their mother works long hours, Cassie's older sister, Miranda, has volunteered to do the food shopping and care for their younger brother after school. Yet the self-centered teen usually does neither so it's up to Cassie to keep things together—all the while hiding Miranda's irresponsibility and her own harried state from their frazzled mother. Meanwhile, Cassie becomes estranged from her former best friends, with whom she was on swim team before financial concerns forced her to quit; her grades begin to plummet; and, since her English teacher seems to be concerned only with the length rather than content of his students' journal entries, she abandons the fantasy saga that she had found great comfort in writing. Impressively, Dee keeps Cassie's dire straits from descending to melodrama, thanks to the heroine's sharp sense of humor, increasing self-confidence, and a spunkiness that readers will find refreshing. Some lighthearted moments between the sisters keep Miranda from playing the total villain. Though most readers are not grappling with the spectrum of losses and challenges that Cassie faces, they will likely be inspired by her resilience. Ages 10-14.