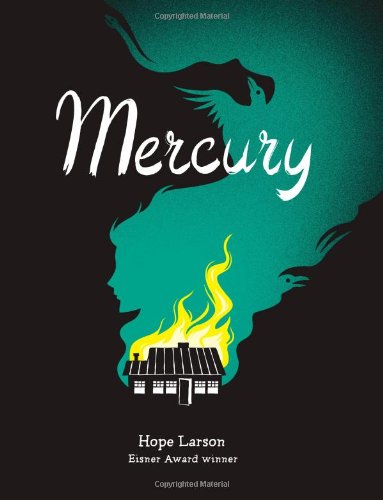 Beginning with a quick historical progression through the fictional town of French Hill in Nova Scotia, from the wilderness of 1400 through soldiers in 1775 to one of the story's main characters going for a run in 2009, this visual history, with fascinating detail, sets up the alternating narrations of the book. One takes place in 2009 and tells the story of Tara, while the other, set in 1850, tells the story of a girl named Josey. That the two are linked by blood is evident. They're also each in possession of the same necklace, a small glass pendant containing a drop of mercury with the mysterious ability to prospect for gold. The stories alternate in quick succession, making it sometimes difficult to keep track of narrative threads as crushes, friendships, and parental conflicts develop in both time periods. Larson's drawings are full of motion and life, her characters' faces expressive, and she uses decorative details to illustrate emotions and ideas. Compared with the wonderful art, the story comes up short, with little action for much of the book, but readers may take pleasure instead in the book's atmospheric appeal and the manga-like illustration of fluttery emotional states. Ages 12–up.