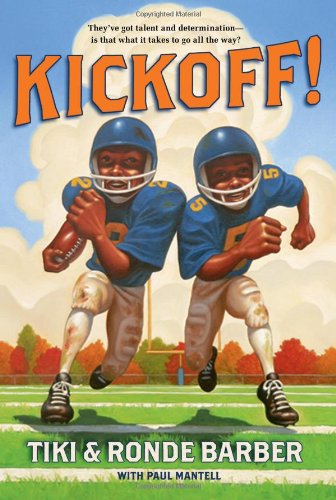 Persistence, patience and teamwork are the themes of this novel based on the boyhoods of the Barber twins ( ). The future NFL stars begin middle school with considerable trepidation: for the first time, they will be in separate classes, and they are among the scrawniest students trying out for the football team. (On the first day of practice, in one of the narrative’s occasional clichéd exchanges, a tough-talking older player taunts them, “You’re dead meat, Wimpy.... We eat seventh graders for lunch.”) The twins are devastated to learn that they’ve only made third string (“They were sick to their stomachs, and had a bitter taste in their mouths—a taste even Mom’s chicken soup couldn’t cure”). But unsurprisingly, Tiki and Ronde get field time during a game against their toughest rivals. Even as the game races to an expected outcome, the swift action delivers genuine tension. Lending noble, if sometimes stiffly delivered, moral dimensions to the story are the twins’ mother, who spearheads a campaign to keep a factory out of their neighborhood; an older player; teachers; and the coach. All drive home variations on the message, “You’ll both get stronger if you work as a team.... In class, and in football, too.” Ages 8-12.