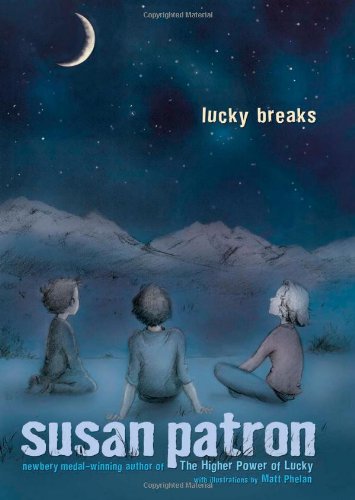 Riding the same wave of warmth and quirkiness that distinguished Patron's Newbery-winning , this sequel continues the musings of Lucky Tipton as she looks for adventure and a best girl friend. Settled in a routine with her “adopted” French mother, Brigitte, almost-11-year-old Lucky has become bored with her tiny desert town of Hard Pan, Calif., but when a group of geologists which includes a girl Lucky's age visits Brigitte's café, things start to look up. Lucky instantly bonds with Paloma, her new “Pal,” not worrying about the effects on her buddies: Lincoln, the knot-tying wiz, and Miles, the five-year-old genius. A mild drama involving an abandoned well plus a mysterious package delivered to the town hippie play a role in helping Lucky make room in her heart for all her true friends and begin to understand her absentee father. Lucky's occasional bratty behavior can be maddening, but her recognition of her mistakes and her efforts to rectify them are endearing. Although Patron breaks no new ground, she skillfully balances sentimentality and humor, allowing her characters to shine once more in their own idiosyncratic ways. B&w illus. not seen by . Ages 8–12.