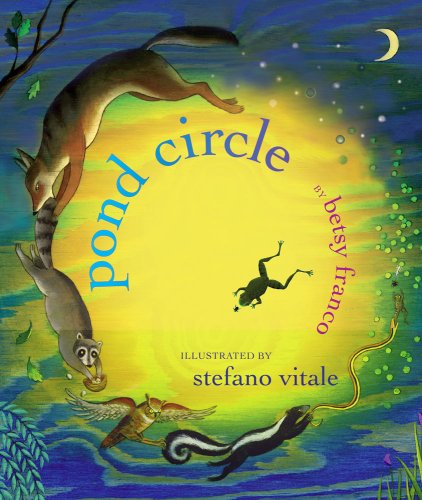 Rhythmic cadences and a dark palette are paired to explore the shadowy setting and circle of life for creatures that live near a pond. The majority of the book is a cumulative poem—“This is the water/ the deep, still water/ that filled the pond/ by Anna’s house./ This is the algae/ the jade green algae...”—though Franco abandons the format, somewhat awkwardly, with two closing stanzas in Anna’s voice. The algae is eaten by a mayfly nymph, the mayfly by a beetle, and a frog, snake, skunk, owl, raccoon and coyote make appearances, too. The overall tone is matter-of-fact yet lyrical, and Franco’s ending “Facts to Pond-er” offers kid-pleasing details about the book’s creatures. Vitale’s somber, nighttime panoramas—oil on wood, with a strong horizontal grain—feature stylized figures that, while striking, may detach viewers from the insect gobbling and egg stealing described. Anna’s facial expression is static, as if she were a carved figurehead on an ancient ship. Although the text is sometimes difficult to read against the muted paintings, young naturalists and poets will be intrigued nonetheless. Ages 4–8.