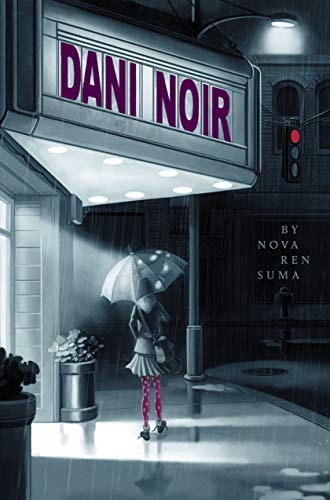 Thirteen-year-old Danielle (Dani) Callanzano's personality is too big for Shanosha, N.Y., “a small town where everybody and their dog knows who you are.” Her only refuge from the hot, boring summer is the Little Art movie theater's Summer of Noir film series. She loves to lose herself in the dramas and striking beauty of stars like Rita Hayworth and Lana Turner, as an escape from her parents' divorce, her father's sudden engagement and her best friend's move. When a mysterious girl wearing polka-dot tights appears in town without explanation, Dani investigates, focusing on Jackson, the theater's 17-year-old projectionist, in hopes of tracking down the “femme fatale” and finding the truth. “If there's anything I've learned from noir movies it's that everyone lies about something,” Dani muses. Her imagination, angry determination and cinematic narration (“if this were a scene in a movie.... It would be deep night, the only light from a few sparse streetlamps. There'd be a whole sea of shadows”) propel the story. Suma's watertight debut displays an expert balance of the realities of teenage life, humor and intrigue. Ages 9–14.