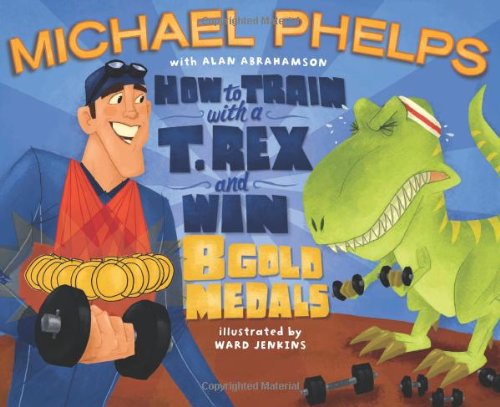 How to Train with a T. Rex and Win 8 Gold Medals

Swimming champ Phelps provides a playful account of what his preparation for the Beijing Olympics entailed. The text jumps from one analogy to the next, beginning with the six years he trained: “That's a kindergartener's whole life! That's the same as 42 dog years!” Some comparisons wow more than others, as when Phelps equates the 12,480 miles he swam while training to swimming the full length of the Great Wall of China three times (“Perfect! Now do it two more times,” says his coach in the accompanying illustration, which shows the Great Wall as a pool that zigzags across mountains into the distance). Humorous but less compelling spreads demonstrate the time he spent napping during these training years. Many of the comparisons are downright silly, including the one that inspires the book's title, in which Phelps tallies the number of dinosaurs he could hypothetically leg-press in a single workout (nine tons worth). Debut illustrator Jenkins's digital cartoons comically mine this and other quirky references, depicting Phelps as a cheerful, larger-than-life caricature. Sports fans with a love of statistics should be both amused and impressed. Ages 4–8.