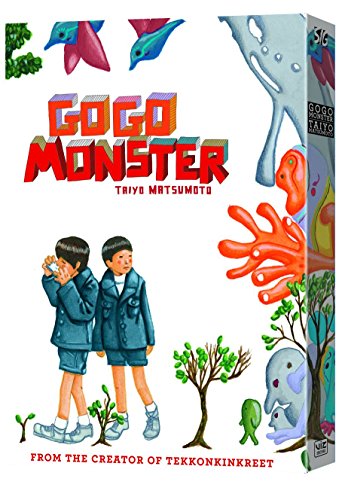 Matsumoto's nearly European art paired with Japanese manga pacing have made him a fan favorite for years, and he won an Eisner for . In , he effectively blurs the line between reality, imagination, and madness. Yuki is an outcast elementary school student who “feels” the presence of invisible monsters at his school. Are Yuki's monsters real or imaginary? The old school groundskeeper has reasons to believe Yuki's monsters do exist, and they seem to influence the level of disciplinary problems at school. While we never see Yuki's monsters outside of the depictions scribbled on his desk, readers share Yuki's other hallucinations. In one troubling scene, his teacher's and classmates' heads are replaced with flowers. Matsumoto brings out the surreal moments in everyday life, such as when Yuki stares into raindrops clinging to his umbrella at the distorted image of his face, replicated a hundred times. The high-contrast contour drawings are heavily influenced by French artists Moebius and Enki Bilal, with occasional nods to the psychedelic works of Milton Glaser and Peter Max. Despite occasionally experimental storytelling, the story is very accessible: Viz has faithfully reproduced the beautiful Japanese edition of the book, complete with red-trimmed pages of exceptional quality and a colorful cardboard sleeve.