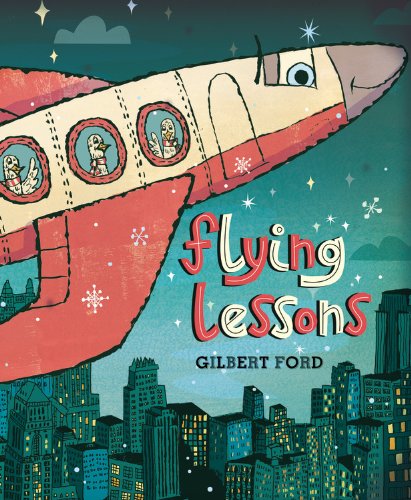 In this misfire, five doves learn “a new way to fly” from a friendly passenger jet. At first the doves look askance at the noisy, “strange bird.... covered in hard metal,” behaving as they do. Not content with mere flying, the plane tries to perch on a power line, use a birdbath, and hatch eggs, with predictably absurd results. The offended doves send the teary-eyed airliner away, but when an early winter strikes, they change their tune and climb aboard the jet for their southerly migration. Ford ( ) employs the hues and kitschy design of 1950s children's books and animation, completing the retro look with postatomic snowflake sparkles and wavering outlines that resemble stitchery. While some readers may enjoy watching the plane contort itself while trying to mimic the doves, the visual jokes fall flat, and the message about keeping an open mind is heavy-handed. After being sent away, the meek jet returns, no questions asked, as a generous savior, and the doves' acceptance feels motivated by self-preservation rather than a real change of heart. Ages 3–7.