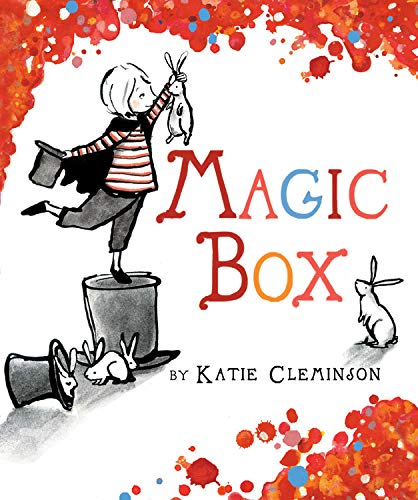 Cleminson's debut, while short on narrative momentum, is full of cheer. Eva jumps into the cardboard box she's received as a birthday present and—“TA-DAH!”—turns into a “master magician,” complete with wand and cape. Her first wish: “a pet called Monty.” (“Monty turned out to be rather large,” the narrator adds—he's a docile polar bear who sprawls across two pages.) Then she pulls a lot of rabbits out of hats and throws herself a rollicking party. When it's over, she clicks her fingers and everything disappears (“Well, not quite everything,” the narrator says, as Eva sits primly on Monty's head). Cleminson uses expressive black brushstrokes to outline her figures, and she adds dimension with gentle gray wash. Dancing, musical instrument–playing animals and an arc of airborne party food contribute to the dreamlike atmosphere, with random splotches and showers of color serving as a visual embodiment of the magic. No conflicts emerge, and Eva's magic doesn't cause any trouble. This is a fantasy about a child who gets to be in charge of everything for a while, and one readers will enter into with pleasure. Ages 3–7.