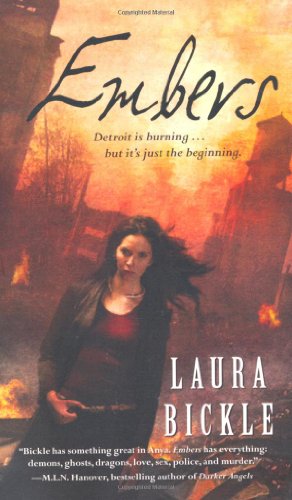 Bickle's dark, dramatic urban fantasy debut introduces Lt. Anya Kalinczyk of the Detroit Fire Department, who investigates arson by day and hunts ghosts at night. As a unique type of medium, a Lantern or “human bug zapper,” Anya can simply inhale and destroy spirits while accompanied by her familiar, a five-foot-long salamander named Sparky. In an unusual turn of events, Anya learns that the arsonist is a Lantern like herself, a man who simultaneously attracts and repulses her. Though she's a far cry from the usual hip, cheeky urban fantasy heroine, Anya's stoic determination is completely apropos for a crime-solving loner, and Bickle provides plenty of suspense as the arsonist tries to raise a powerful elemental being, and Anya accidentally absorbs a demon that threatens to possess her. Readers will look forward to Anya's future supernatural investigations.