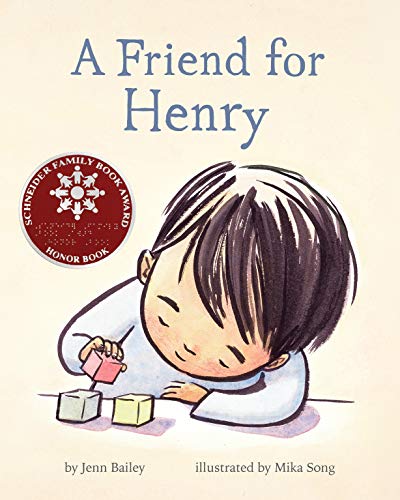 A Friend for Henry

This quiet story looks on as Henry, a boy on the autism spectrum, interacts with his classmates in search of a friend. With sensitivity and thoughtfulness, Bailey explores Henry’s literal-minded, analytical personality and the way it clashes with some of the other children’s dispositions. When Henry arranges carpet squares for reading time (“All the edges met and the corners fit perfectly”), his classmate Samuel grabs one, insisting that it is a magic carpet. Henry becomes frustrated—the squares were carefully arranged, he says, and they’re “from Rug World. There’s a sticker.” Artwork by Song (Tea with Oliver) captures Henry and his classmates in graceful, economical strokes. When he’s upset, Henry’s eyebrows furrow and his fists clench. Soon, though, he’s watching Gilly the classroom goldfish; another child, Katie, watches the bowl silently opposite him. “She’s shimmery,” says Katie. “But she doesn’t blink,” Henry responds. Young readers will see that Katie is the kind of friend who will give Henry the space and consideration he needs, and they’ll feel his relief. Bailey, the author’s biography explains, is the mother of a child on the autism spectrum, and her portrayal of what autism might feel like from the inside rings true. Ages 5–8. [em]Author’s agent: Rosemary Stimola, Stimola Literary Studio. Illustrator’s agent: Erica Rand Silverman, Stimola Literary Studio. (Feb.) [/em]
close
Details