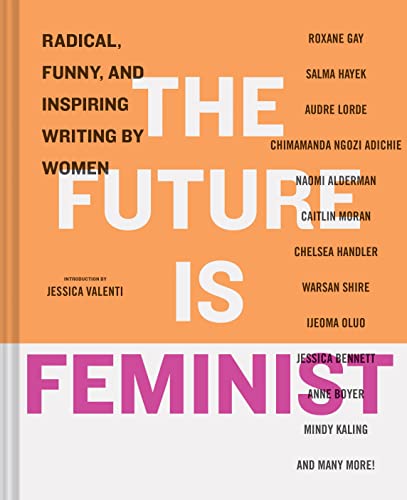 The Future Is Feminist: Radical, Funny, and Inspiring Writing by Women

This attractively bound anthology, which brings together previously published writings on feminism from well-known authors, actors, and activists, will appeal to both battle-worn feminists and those new to or curious about the cause. The collection begins with a useful guide and brief history by Rachel Fudge, former editor of Bitch magazine on the different “waves” of feminism. Then comes a sampling of writings dating as far back as the late 18th century and as recently as 2017. The various pieces, some humorous and some serious, most written recently, tackle such topics as domestic violence, assault, intersectionality, beauty bias, “resting bitch face,” media stereotypes of “likable” women, financial independence, and equal rights. The authors included—among them Sojourner Truth, Audre Lorde, Arlie Russell Hochschild, Naomi Alderman, Roxane Gay, Caitlin Moran, Chimamanda Ngozi Adichie, Mindy Kaling, Warsan Shire, and Jia Tolentino—are witty, smart, and unapologetic, and their works are united by their authors’ commitment to gender equality and choosing their own paths forward. Readers will take away many useful messages, among them Ijeoma Oluo’s “I don’t have to fight each individual foot soldier of oppression; I can keep my focus on the big picture and my fight on where it could be most effective.” This wide-ranging collection neatly encapsulates the priorities and touchstones of contemporary feminism. (Feb.)
close
Details