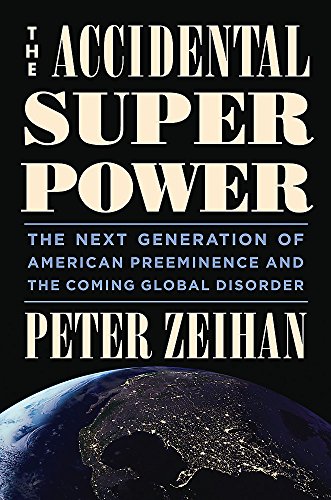 The Accidental Superpower: The Next Generation of American Preeminence and the Coming Global Disorder

More by luck than by design, America will prosper in the coming decades while the world goes to hell, according to this eye-opening, contrarian survey of geopolitics. Geopolitical analyst Zeihan bases his predictions on “accidental” factors of the U.S.’s terrain (navigable rivers and rich farmland), resources (abundant shale gas and oil), demography (a relatively young, vigorous population), location (oceans that guard against invasion), and economics (vast consumer markets and cheap capital). The rest of the globe, he argues, will suffer from aging populations, dwindling resources, and the lack of a stable modern-day equivalent to the post-WWII Bretton Woods regime, which fostered free trade, protected sea lanes, and served the world’s export market; the collapse of the international order will include the collapse of China, the breakup of Canada, and war in Europe. Zeihan’s freewheeling, very readable analyses draw on historical examples, from ancient Egypt to modern Denmark, and a wealth of statistics, packaged with interesting maps and graphs. His generalizations can seem oversimplified, and his prognostications eccentric, such as the prediction that a “wave of young Uzbeks will wash asunder all foolish enough to stand in their way.” Still, Zeihan’s provocative take on how land, climate, energy, and population determine wealth and power makes for a stimulating challenge to conventional wisdom. Agent: Jud Laghi, Jud Laghi Agency. (Nov.)
close
Details