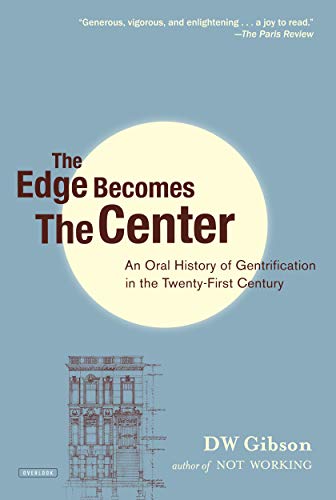 The Edge Becomes the Center: An Oral History of Gentrification in the Twenty-First Century

In this impressive and multifaceted oral history, Gibson (Not Working) explores “how gentrification affects lives” by interviewing a wide range of people living and working in New York City. As the author makes his way through the gentrified and gentrifying portions of Brooklyn (Prospect-Lefferts Gardens, Bushwick, Bedford-Stuyvesant, Red Hook) and Manhattan (the Lower East Side, Chelsea, Harlem), he interviews real estate agents, contractors, landlords, renters, housing lawyers, community organizers, city government workers, architects, artists, a squatter, a drug dealer, and an investment banker, among others. Common themes include displacement, the contradictory class positions people occupy, the rising homeless population and their “criminalization,” the declining stock of affordable housing due to buyouts and deregulation, the way universities (particularly NYU and Columbia) have become some of the biggest landowners in the city, the ballooning waiting list for public housing, absentee landownership, and the forces of capitalism versus democracy. Central to this work are the distinctive voices of the New Yorkers Gibson interviews, the niches they carve out for themselves, and the myriad ways they are molding, and being molded, by their neighborhoods. Gibson manages to capture a global city in flux, in grave danger of losing its diversity—and hence all that makes it special—with its focus on capital investment over the needs of its people. Agent: Chris Parris-Lamb, the Gernert Company. (May)
close
Details